Beyond the fascination and the fashion, the facts.

The American company Tesla that produces electric cars and that is considered as the leading innovative industrial company of the 21st century is starting to show what it’s really worth, which turns out to be a lot of talk without much concrete action.

Tesla took over the NUMMI (New United Motor Manufacturing Inc.), a joint venture created by General motors and Toyota, production sites that operated from 1984 to 2010.

From the beginning on out, Tesla, through its founder and CEO Elon Musk, wanted to disrupt the automotive industry paradigms with a futuristic view of production processes.

All of the lean production experience built up over the last decades by the best car manufacturers didn’t count.

The message was clear: production is a technical engineering problem and the solution is to automate.

Elon Musk fuelled this vision and mentioned it in a press conference in 2016 : “We are pushing robots to their maximum operation speed, we are asking our suppliers to build much quicker robots and they are shocked by our requests as nobody had ever made them before”

However, comparing productivity between the old NUMMI site and Tesla is very revealing and leaves no place for doubt:

Tesla’s problems aren’t only productivity related, it has been revealed that they also have heavy quality issues.

Recently Elon Musk admitted to have been wrong with his vision: “excessive automation for Tesla was a mistake”, and then in a following tweet: “To be more precise: human beings were underestimated”

To reach the production capacity requested from the market for years and that Tesla had never managed to reach, they are now currently assembling cars in tents in the desert.

Lean production experts will notice how far this assembly line is from lean principals and methodologies. 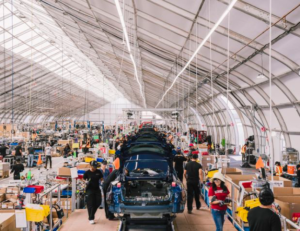 After having disappointed the market in terms of delivery times and product quality, the company is now in a difficult situation.

The root causes of the difficulties

Applying Silicon Valley mindset to manufacturing does not work.

Car manufacturers have very structure processes to design and built cars. The cars are designed and extensively tested years before the start of production.

This is the exact opposite of what happens in the software market.

As it’s so easy to make changes and to distribute software, companies put the priority on creativity, quick interactions between development processes and distributing to the market.

Musk made his first millions with software and therefore wanted to apply the same “agile” approach to the car industry.

In an article published in Ars Technica (see reference below), John Shook, one of the most renowned experts in lean production, explained: “everything at Tesla is meant to be quick: the car, the development processes, the launch and the production”

He then goes on to add: “the Tesla approach is as follows: let’s start producing the car before even having finished designing it, as the car we are production is a beta version even if clients paid for it”.

This approach can only work in the software industry where a programmer can change a line of code and then reconstruct the whole product by pressing a button.

In a manufacturing industry, this does not work. A change in the design impacts a lot of other components and tools to reconstruct the changed parts.

There is a lot of good in both approaches, but when it comes to the car industry, it isn’t very reasonable to throw years and years of positive experience from lean production to embrace a new vision coming from another industry (like Musk did).

Tesla still hasn’t made any profits yet, from the start of its activities onwards.

If they carry on in the same way, I don’t think they ever will.

Mario Mason is a lean manufacturing consultant with more than 15 years experience throughout which he helped his clients achieve double digit productivity increases. Mario Mason is also a certified coach at the International Meta-coaching school and a NLP trainer.

IndustryWeek: Tesla vs. TPS: Seeking the Soul in the New Machine

Determine which cookies you want to allow. You can change these settings at any time. However, this may result in certain functions no longer being available. For more information on deleting cookies, please consult the help function of your browser.
LEARN MORE ABOUT THE COOKIES WE USE.

With the slider you can enable or disable different types of cookies :